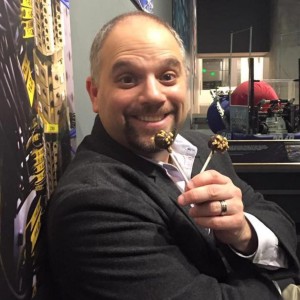 Let’s talk content. I’ve been writing for business-to-business (B2B) clients since, well, last century. Yes, I’m “experienced.” But I learned almost immediately that the vast majority of B2B marketers believe that they need to communicate with their target audiences … differently.

Most B2B folks think that statistics and charts and graphs will convince people to choose them and that there’s no room in “serious business” for humor or wit or “out-of-the-box” thinking. And I’m here to tell you that’s just not true.

Meet Arnold. He’s an automotive engineer, designing the car of the future. And because your company manufactures seatbelts, he’s a terrific representative of your target audience.

This is a classic B2B scenario. And the classic marketing solution is for your marketing team (or your agency) to whip up a print ad, usually with a product photo for the main visual and a headline like:

Arnold just might see that in the trade publications, or on a direct mail piece you send to his office, and he just might be interested in the 30% promise. But when he’s the chief engineer specifying parts on a multi-billion dollar project and he’s not interested, then the old way has failed you.

Arnold gets into his car to head home. On the radio, he hears a commercial for his favorite pizza chain with a terrible but funny jingle. Something about:

“Ya Gotta Eatsa Pizza with A Whole Lotta Meatsa!”

Arnold chuckles and realizes that a large pie with pepperoni, bacon, ham and ground beef is just what he wants for dinner. Sounds great! Then while still stuck in traffic, he sees a billboard for one of his favorite local microbrews with the headline:

“Brewed From the Cool, Crisp, Refreshing Waters of Smithville River”

Thinking that’s the perfect companion for his Meatsa Pizza, Arnold decides to pick up a six-pack too.

You can see that reaching Arnold ­– and persuading him to choose a product – isn’t all that complicated. Wanna know why? Because he’s a person. He responds to advertising messages the same way whether he’s at the office, in his car, at home, or wherever he goes.

So instead of focusing on the old B2B marketing ways, give some thought to these three suggestions:

The Exception to the Rule?

Yes, you just might create a print ad with a beautiful product shot and a convincing-but-plain headline that gets the orders coming in. Heck, I wrote a direct mail piece (again, last century) that got a 40% response rate! Know what it was? A photo of dirt, with a boring headline talking about “Before you build, know what’s underground.” The call-to-action was simply to respond “Yes” and we’d send them a free research report.

While this was a lot like today’s gated content – “Enter your email for a free look at our exclusive case study” – it still did amazingly well for an old-school B2B mailer. (But I still think my original idea of sending them a little paperweight bag-o-dirt would have been a lot more memorable.)

Do you believe in the old-school B2B way? Or do you think that B2C is more effective, even in the B2B world? Post in the comments below. And if you found it interesting please share this blog with your social networks!

Harley David Rubin is a freelance copywriter, content creator and marketing strategist who has worked for both advertising agencies and corporate marketing departments for more than 20 years. He loves his family, pop culture, fantasy baseball and creativity in all its forms.