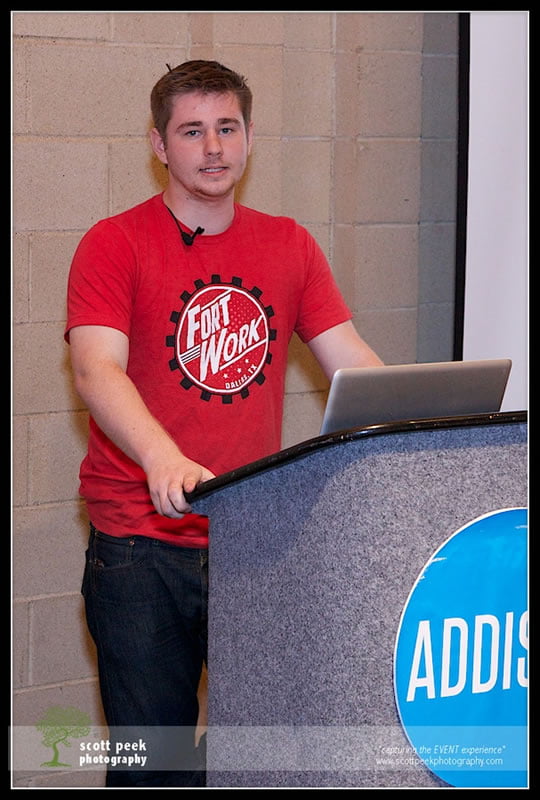 Mason Pelt, keynote speaker presented “Facebook Marketing” at #DFWRocks2014. A few of the highlights of his presentation are listed below.

“No Tengo Common Sense” – had posted an ad to talk about a story where a girl was discriminated against at a Taco Bell. Even though there were only 8 clicks, there were actually 10,000 impressions.

Question: How do you define the “reach” parameter?

Mason: You mean ‘how much of a reach your Facebook post has’? The reach parameter is similar to how Google Analytics works. Now they could be lying to you, BUT they are doing it rather consistently across the board. The metrics from Facebook are pulled from a cross section if you are under a million fans, or under a million impressions.

Here is a quick funnel for how a Facebook ad should work:

Facebook.com/ads/create – this is the Facebook ad creator. You can do overall awareness or very specific targeting when you are doing your ads.

The ad that Mason is demonstrating is an ad for a T-shirt company (basically 9 sweaty guys working hard for the money).

If you have $1 a day to spend on Facebook then you would have ads that are VERY specific.

MASON TIP: I tend to do over 21; that way if it gets flagged for alcohol you are still covered.

On the ad that Mason is creating he is going with New York people that are over 20, and work at the New York Times. Mason is bidding twice as much as the suggested amount (Facebook likes money).

Question: How do you know that your targeting is accurate?

Mason: The targeting is what you say you do on Facebook. Ex: LA Times has less than 20,000 people working there (but Facebook says there are 20k+). In their defense, there are a few people who have written for the LA Times even though they do not work at the actual building, and Facebook does not give you the option of “I wrote an article for the LA Times“.

In the room, only 4 or 5 people raised their hands to the question “How many of you run Facebook ads?”

How to use a program called Boost by Epic Playground – a MAJOR program that Mason loves to use to get lots of traffic to his ads.

If you manage over $5,000 in ads per month with Facebook, they automatically assign you an account manager (Mason manages over $350,000 per month).

Question: What is the difference between CPC on Adwords and Facebook Ads?

Mason: On Adwords it is doing a search. People are actively looking for something when an Adwords ad comes up. On Facebook it’s there more casually. Some have argued that it is a waste to do Facebook ads, but although someone doesn’t go to the LA Times to look for clothes, if they see an article about a certain type of clothing, they are more likely to buy that type of clothing.

Last click attribution: The last thing that a person went to is what gets the credit for getting someone to a place. Now there are more specific ways to track your results from ads and marketing.

You can also use pixel targeting to help you track you stats better.

Facebook.com/ad/manage and click on “Audience.” This will show you different things that you can optimize for your ad targeting.

However, it does not give the average Facebook user that info directly. You do, however, have access to general topics or audiences. But basically, this is HOW Facebook is able to target that custom audience for you.

(This is a relief for those who were thinking that Facebook was just taking a guess, or only depending upon the information that people give on Facebook, which may not be accurate.)

So on this page, we are doing a custom audience – emails, document list, etc.  In the example Mason is doing, we are pulling the information from a data file. In this case, it will be a .CSV file.

Mason uses email lists for segmenting. You can use this with Infusionsoft, etc. to help with split testing. You can divide the list along gender, age, etc.

You can get people to like a page, but just because they ‘Liked’ your page doesn’t mean that they are interested in your product.

Ex: Ad targeted everyone that had an engineering degree, but didn’t get the response that they were looking for.

For now Mason is going back to the regular editor. It gives you the choice of what type of media that you want to use for your ads.

Mason would love to have someone say “Jugglers who use Facebook ads are SO SEXY!!!!!”

It is easier / cheaper to work with ads that are auctioned than just ones that allow someone to click off of Facebook.

Dyslexic Jugglers That Use Facebook Ads ARE HOT!!!! (per Mason’s fantasy)

On the next ad, Mason gets rid of the “Right Column ads” because he hates those types of ads.

So you want to be a Reality TV Star? This is actually a strong call to action.

There are many ways to get the demographics on single moms, but usually the most useful is the kind of cars they drive, and their income level.

The average is around $45k, but the preferred, for this ad, will be $65k. On this ad, they are targeting those that are in the military.

Question: If you are targeting military, then would you also want to target military brats?

Mason: You would actually want to target military, and friends of fan starter. Basically, you are looking for things that military people would do on Facebook.

Optimize CPM – I want to pay Facebook for as many impressions as possible, BUT I also want to get as many ‘likes’ as possible. Basically, you are paying for ‘likes’.

Question: How does paying for Facebook ads compare to others?

Mason: Twitter is great for customer service stuff. If you are doing B2B then you want to connect LinkedIn to Facebook. Instagram is not quite there yet, but Facebook is the main social media ad place to be.

Question: How do you prove ROI from social media?

Mason: I worked with a company called Blitz Metrics, and they are able to integrate social media metrics. Did a test ad and was able to prove a 20% increase in sales due to a Twitter campaign targeted to Detroit.

You can learn more about Mason by visiting MasonPelt.com.

Edgar Griggs loves to learn about new technologies and high tech gadgets! You’ll find him at local events around the DFW Metroplex and sometimes blogging for websites like The Interestingly Cool Stuff Blog and his TrendHunter page at TrendHunter.com/CoolTrends!