The Key to Networking at Rocks Digital and Other Conferences 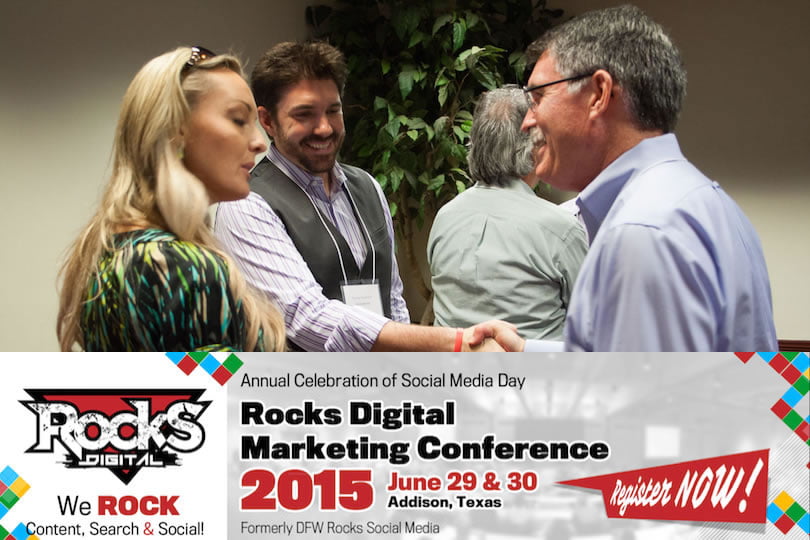 What is one of the best parts of Rocks Digital Marketing Conference? While the educational sessions and speakers are really awesome, one of the favorite parts is the networking, networking and more networking!

Let’s Count the Ways to Network at Rocks Digital

You can make new friends, business connections, and new customers just by saying “hi” to someone you haven’t spoken to before.

This list of stories about the networking and opportunities that develop from attending conferences like Rocks Digital could go on and on. We’ll close out this section with this testimonial about the 2014 conference.

This is a family reunion of digital and marketing strategists where tribe leaders teach the rookies how to become successful community leaders. This is an industry where an exorbitant amount of information is expected and this conference serves a full two-day package of non-stop sessions and picnic lunches. Tips, tools, apps, resources, and advice far exceed the best typists wpm – however, they provide instant ability to download slides, presentations, videos, and links. Prepare to give away a tall stack of business cards, connect with dozens of people on LinkedIn, win a few door prizes, get newly published books autographed, and of course – walk out the door with invaluable insight into the constantly changing world of social media.

With all these networking opportunities waiting for you now might be a good time for a few networking tips.

Be Available and Open to Networking

Send the right signals. Put your technology away and a smile on your face, especially in between sessions and during designated networking events. No one feels comfortable starting a conversation with someone that looks like they are already engaged in one with their electronic gadget.

Step out of your comfort zone. When you walk into a room full of people, don’t immediately migrate to the people you met at the last session or that you sat with at lunch. Instead look for someone you haven’t met yet and introduce yourself.

Keep your business cards in your pocket. Many people believe that they have been successful at networking if they have given away all their business cards. Only give your card to someone that asks for it. Networking is not a giant business card exchange. You should have more significant conversations with the people you meet and make a real connection, not just exchange cards.

Networking is not about you. Contrary to popular belief, you should be asking more questions about the person you’re talking to than telling them about you and your business. People want to feel like you care about what they are saying and not like you are just waiting for your turn to give your “elevator speech”.

Networking is about connecting others. Listen to what people are saying (watch Dean Lindsay, author of Cracking the Networking Code and The Progress Challenge: Working and Winning in a World of Change) and what current struggles they are facing. Then when you meet someone else that has a solution to that struggle, you can get the two together for mutual benefit. You may think that seems like lot of work for no return for you, but you would be wrong. You have solved the problem of one person and given a potential new customer to another. You have gained 2 new fans of you who will probably take the first opportunity they get to return the favor.

Follow up. Networking doesn’t work without the follow up. Send them a quick email saying it was great to meet them and then mention something that you discussed with them. And, if you say you are going to send somebody something or connect them with someone. Do it. And not in 2 or 3 weeks either. Follow up with them within the 1st week after the conference.

Lissa and Bernadette’s prior conferences have been the birthplace for many great connections. People at our conferences become life-long friends, find new jobs and become business partners!

However, the best networking connection to come out of our conferences was the meeting of Lissa Duty and Bernadette Coleman, the founders of Rocks Digital! Come meet them at Rocks Digital 2015 and you will know why I say that.

Share below your favorite moment below from either the DFW Rocks Social Media Day Conference or the Local Social and what you are looking forward to the most at Rocks Digital 2015.

Learn more on this important topic at one of the largest digital marketing conferences for 2015!

Diana Wells is a writer, a poet, a blogger, an event manager and someone that loves to make people laugh. Lover and rescuer of any kind of animal, especially dogs, horses, hedgehogs, elephants and sloths. She doesn’t actually rescue elephants and sloths but supports organizations that do.