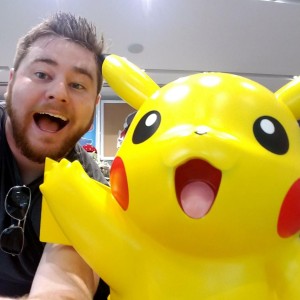 Saying that marketing on social media doesn’t work because you’re not seeing a return on your investment is like saying that the treadmill you faithfully use as a coat rack isn’t working because you haven’t lost any weight. If you’re not making money on Facebook, YouTube and Twitter, odds are that you’re not using them correctly. Social media ROI is not a myth!

These are not only large sites, but also they all offer robust targeting options to reach your desired audience, using optimizations on the platform and media buys. Saying that you don’t see any returns on social media means that something isn’t right and changes need to be made.

Here are the top four things to change if you want to see social marketing make you money:

This seems almost too obvious to point out, but a lot of people focus their marketing on vanity metrics. “Likes” and “Followers” mean nothing. At one point, I had a Klout score that was 15 points higher than Joe Biden’s. Now, as much as I would like to believe that I was more influential than the Vice President of the United States, I have a sneaking suspicion that I wasn’t. But the metrics told me so and numbers don’t lie! Well, numbers may not lie, but they don’t always tell the whole truth.

Despite how big Klout.com claimed my social media megaphone was, no one cared about my ideas on foreign policy. (I think we should have one.) No one was asking for my input on economic problems. (I am staunchly opposed to them.) And no one was clamoring to know my views on law enforcement reform. (I’m not about to touch that here!)

When I begin working on an account, I require a tangible goal. Normally, it is to improve sales with direct marketing. Sometimes, it is to improve awareness for a ubiquitously available product like soda or makeup that can be picked up at any store. But, ultimately, I try to compare year over year trends, or run split tests in different cities to prove an increase in demand caused by social media. Wait a minute. This is beginning to sound like my next point.

Set Up Your Analytics and Sales Tracking Properly

Facebook and YouTube each have platform analytics data that blows my mind. But, seeing if someone clicked doesn’t show what that person did off of the site. You know your goals. You should track those.

Assuming that you sell a product using ecommerce, Google Analytics Goal and Event Tracking, along with UTM strings to track the links you share, will give you a very clear idea of what is and is not working to drive sales. If you’re running ads, something as simple as a conversion pixel in your website will at least give you last click attribution.

Truth be told, I think last click attribution should be placed on the shelf with that $400 Beanie Baby, because it’s time has passed. I have seen analytics mangled in more ways than I can remember, but the worst thing is having nothing to show your results off of the platform.

In a perfect world, you should add every tracking pixel that makes sense (Try Google Tag Manager for this) and integrate your Google Analytics by using UTM strings tied to Goal Tracking. If you want to go the extra mile, try using dimension widening to add more data from your point of sale system, other any other data you like. Go nuts. I do, also in the name of Mat Cuts make your site HTTPS, you’ll thank me.

Spend Money When It Makes Sense

I had a large company tell me that buying ads would break their organic image. This company did pay for television, radio and billboard advertising. This Facebook fan page was posting multiple times a day to over 100,000 fans, yet was getting fewer than 30 weekly engagements and a weekly reach of fewer than 700 people. With stats like those, can you really say you have an organic presence on social media?

Nearly every free social network makes money by selling its user data to advertisers. If you advertise, you get rich user data that can target exactly who you want to see your content. I’ve used this with great success for direct marketing, but ads targeting your own fans on Facebook or Twitter can drastically help improve your engagement. If you are a large consumer brand, you can track the engagement increase and see if it correlates to sales.

The moral of the story is that sometimes you have to pay to play. If you don’t want to cough up some cash, try email marketing. Remember it doesn’t matter who says you’re more influential than the Vice President of the United States. If you don’t own the platform, you don’t own your audience.

Since your goals should dictate how you approach everything else, when you focus on the wrong KPIs (key performance indicators), you lose before you’re even out of the starting gate. You can’t make money if you focus on building an audience of people who will never buy your products or services.

Yes, cat photos are engaging, but unless you operate a pet store or “I Can Has Cheezeburger,” it’s hard to make cats profitable. It is, however, possible to be creative and talk about cats without really talking about cats.

On the flipside, you can’t just sell. You’re on social media, not sitting in a kiosk in the middle of a mall. You need to balance engagement, while staying on brand. That can be tricky, but it is yet another reason to focus on meaningful goals and not vanity metrics.

Did I mention that, during the early days of Klout, I was more influential than Joe Biden on that platform? The heartbreaking truth is that it didn’t make me any money. None. Zippo. Zilch. Bupkis. Heck, it didn’t even get me a guest slot on “The Daily Show,” with Jon Stewart (who has always had a higher Klout score than I have).

If you want a return on investment, act like it. It’s time to take your metaphorical coats off of your metaphorical treadmill and make some positive changes. Know what “return on investment” means. Don’t be penny smart and pound foolish, as my British friend, Mel Carson, would say. Spend money if it’s going to help you, but spend wisely. Be relevant. Don’t just sell, and don’t just share irrelevant things in order to be popular. You can go broke and lose your identity while sitting at that popular table.

Join me in “Finding ROI in #SocialMedia Marketing” by @MasonPelt #RocksDigital

What do you consider Social Media ROI? How do you track it? Comment below and let’s discuss.

Mason Pelt is the founder and managing partner of Push ROI. Push ROI is a digital marketing and SEO Agency in Dallas.

Partner with Rocks Digital as we create a new year of fun, networking and learning at our 2022 digital marketing and local search conference. The 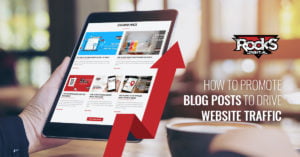 How to Promote Blog Posts to Drive Website Traffic

From the smallest local businesses to the largest global enterprises, blogging has been a consistently popular content marketing strategy for many years. But while the